This is my second set of shelves this fall. I probably scrolled by the photo of the white shelf hanging by rope a dozen times on Pinterest in the past. While cute & rustic, it hadn’t caught my attention before. Well, that was until a couple weeks ago. I finished my livingroom shelf and my mind was storming with “make something to….”
Throw in this problem area in the kitchen. This is actually one of several. How is it possible to have a kitchen 4 to 6 times larger than my previous kitchen but have a fraction of the space?!? One word = pantry. Hopefully, I’ll get to that. Back to the space. This space: 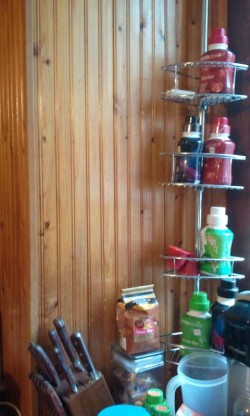 This is the sort side of our kitchen with this little cut-in housing pipes. Well, I assume that is what is in there. Just to the right is a window; further is the sink. When hubby got his “soda stream” this became the designated spot. With the actual machine come bottles, lots of bottles. Bottles with mix. Bottles for the drinks. Well, bottles become clutter. We attempted to use one of those shower organizers to store the bottles. It would have been a good idea, but…. the ‘shelves’ curve in just enough to make only one flavor bottle fit. Not ideal.
Thus, the need for a better organizer, up off the counter with making minimal wall holes.
Hubby brought home some scraps of wood. (You’ll find that I love making things from scraps.) I picked two that were 18″ long. (Pre-cut is a current must as all I have is a small craft hand saw.)

They needed to be sanded. Really, really sanded. Being a soft pine, they sanded up quickly. I managed to conceal the two holes fairly well.
After sanding, they each got 4 quarter inch holes. These were 2″ from the end and 3/4″ from the sides.
Then came staining. (Thought I took a photo, but guess I didn’t.) I had a dark walnut on hand from my previous projects. (This walnut will be used a lot.)
The 12′ of rope was cut into 2 pieces. I wrapped the ends and cut spot with tape before cutting. This helped with the fraying and acted like the ends of shoe laces Each was folded in half and marked 18″ from the fold. I threaded the rope through the top shelf and made the knots at the marks. I then marked 10″ below the knots. Threaded the next shelf and made the second set of knots.
To keep the rope below the knots from fraying, I melted about an inch of rope below the knot with the grill torch. Then cut the rope to length.
I hung the rope on a pair of 25 pound hooks.
Here is the results:

(I’ll be better about taking step by step photos as we go.)

The Most Recent Posts

What’s With the Name?

A Little About Me:

My name is Anna Worden Bauersmith. I am a historical milliner and the author of:
~ Fanciful Utility: Victorian Sewing Cases and Needle-books
~ From Field to Fashion: The Straw Bonnet and
~ Paisley, Plaid and Purled: Victorian Shawls.
Along with this blog, "Don't Paint the Cat", I also write another blog, "If I Had My Own Blue Box", where I share historical research, projects and interpretive tips.

If I Had My Own Blue Box